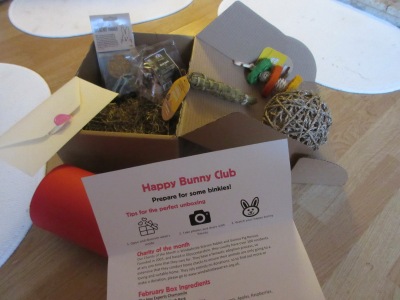 I was very lucky to receive a subscription to the Happy Bunny Club, which delivers a box of all-natural rabbit treats every month :-).

The box, which handily doubles as a place to sit and eat delicious hay (provided), contains a great mix of treat and so-called “boredom breakers” (I’d say Edward regards the latter more as “destruction projects”).

I’d never seen Hay Experts products before – the box contained one bag of Chamomile  and one of Birch Bark. The rest of the items were from the Rosewood range, which is pretty widely available: Naturals Fun Ball, Breakfast Cookies and Loofa Hoola, and a Boredom Breaker Woven Roller. 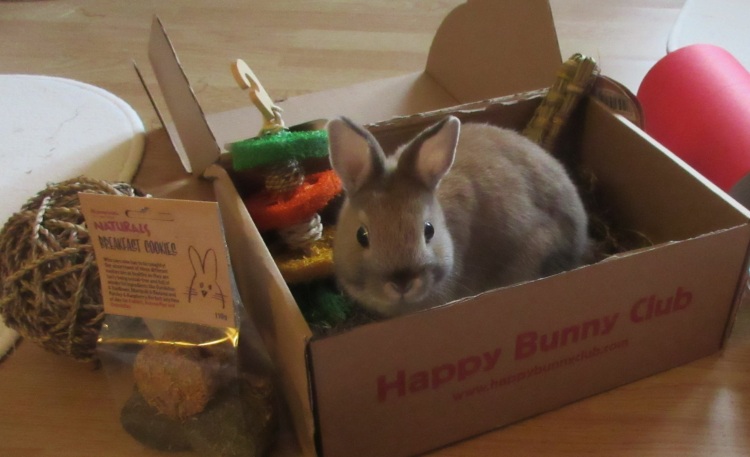 Edward was very interested in the Fun Ball right away, although it only briefly distracted him from an ongoing destruction project that isn’t quite complete. He’s a methodical little guy. The Fun Ball will definitely be destroyed. Oh yes, it will be destroyed.

The Loofa Hoola might survive a little longer, as he hasn’t been too interested in an equivalent dangling toy in his cage, which he perhaps views more as an interior design flourish than something to nibble on. However, the loofa parts of this new one look pretty tempting.

I’ll report back with updates on how the other items go down. I’ll be breaking the Breakfast Biscuits in half before serving, given he’s only a little bun.