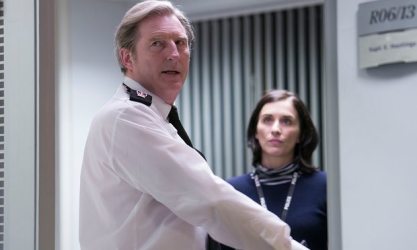 There’s been one simple question at the heart of this series of Line of Duty: why did Roz cover up what happened in Tim Ifield’s flat? The answer provided in this last episode is far from satisfactory, with Jed Mercurio falling into the same trap as Broadchurch writer Chris Chibnall.

Roz Huntley knows from her years as a police officer that self-defence is difficult to prove, just as Trish Winterman knew rape victims are often disbelieved. But the problem with the plots of both these show is that in these specific instances there could be very little doubt.

Just as there could be little doubt that Trish was knocked unconscious and raped, there was plenty of evidence that Roz was knocked unconscious and very nearly dismembered by Tim. He bought the tools for the job that very same night! He was wearing a forensic suit when he died! Yes, Roz shouldn’t have gone to his flat to confront him but I’m going to hazard a guess that her punishment for doing so wouldn’t have been a ten-year stretch.

The only logical explanation for Roz perverting the course of justice was that she was involved in a larger conspiracy, and admitting her visit to Tim’s flat would have raised questions about the stitching-up of Michael Farmer. Instead it seems the only deliberate framing she was involved in (including that of her own husband) was about saving her own skin. Utterly ridiculous.

Many seem impressed with the way Mercurio’s story spanned four series, but again, as with Broadchurch, there’s little to suggest things were cleverly laid out in advance. I’m OK with the fact that Balaclava Man was never unmasked, but it’s a complete cheat to say “oh hey, remember there were some balaclava men in series one a million years ago and they put bodies in freezers? Yeah, basically that again.” And as for introducing yet another H-named senior officer in the last hour…

On the plus side, I enjoyed Sharp Shooter Ted (perhaps him and GI Kate could join some kind of anti-terror armed response unit in a spin-off series) and the Jamie-related twist, although I’m not sure the latter made any sense whatsoever. Did he know what Maneet was up to? Was he trying to execute some sort of double-bluff by acting like a bent copper while actually being a bent copper? Were his digs at Steve related to the fact that he’d worked alongside Steve’s ex, Woman With Impressive Eyebrows? (That was Steve’s ex, right? If so, why did Kate try to imply that she’d been a cow for dumping him? I’m pretty sure she did so on the grounds of dodgy behaviour with Lindsay Denton. A casual observer would think she’d pulled the plug after he’d been flung over that balcony.)

Speaking of Eyebrows, the interview technique of her and Hargreaves (another “H”) was terrible. “It wasn’t me, it was the one-armed woman” was a nonsensical retort given the one-armed woman in question had two working arms at the time of the offence they were discussing. It was enough to make me wonder if she was involved in the conspiracy to frame Nick for Roz’s crime … but of course there was no such conspiracy, unless you count eager beaver Jodie as a conspirator.

Maybe “H” has been Hastings all along, but is there any actual evidence to support this? I’m certainly not about to scour four series’ worth of episodes for clues, because there’s not a chance Mercurio mapped it all out on that basis.

Finally: who the hell hangs up a tracksuit?

4 thoughts on “Line of Duty series four, episode six: is that it?”