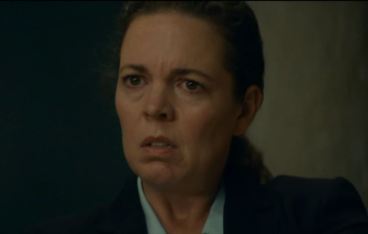 Errrr … what?? I can’t pretend I was holding out much hope that the conclusion of this series – and indeed Broadchurch as a whole – would be coherent or satisfying, but I could not have conceived of a more ludicrous police interrogation scene to top it all off.

I knew last week’s cliffhanger was only going to muddy the waters further. Sure, someone’s DNA was found on the sock used to gag Trish, but surely all this established was that someone had worn that sock on their foot, not that they’d been the one doing the gagging.

By the time we’d got to the first ad break of this finale we still had Clive/Lucas, Jim, Ed and Twine Boy in the frame … and I was confident the culprit wasn’t going to be any of them (not least because my money was still on the vicar). And technically, if we’re talking about the rape of Trish Winterman, it wasn’t. No, Trish’s actual rapist was Lucas’s ill-treated stepson. And he didn’t want to do it – he was coerced into it by Twine Boy.

Is this even physically plausible?

Twine Boy proceeds to give Hardy and Miller a detailed and emotionless account of how he raped the other three victims, ludicrously offering that it was “only sex” despite the fact that it was also knocking women unconscious and tying them up. Miller’s been banging on all series about the psychological profile of rapists, but “I groomed a 16-year-old into becoming a rapist because he seemed lonely” doesn’t quite fit the paradigm. So yet again we’ve sat through eight hours of TV only for the resolution to involve a thoroughly improbable scenario.

I have to say I really hoped Beth and Mark would at least leave open the possibility of getting back together. Theirs was really the only authentic human relationship in this whole show.

Lastly, has Trish forgotten that her husband installed spyware on her laptop? Just because he’s been chucked by his new woman and denied a caravan by Ed, that doesn’t mean he’s entitled to a pity Chinese.

And I still don’t trust that vicar.