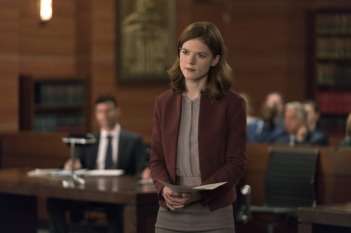 Julius is back! And Marissa too. Not to mention multiple old faces from the Chicago court circuit. Now I understand why The Guardian described the opening double bill as the Avengers assembling – all we need now are some cameos by Elsbeth and Eli and it’ll be just like old times.

The Good Wife raised a lot of questions about employees rights, and didn’t shy away from portraying its privileged main characters as union-busting monsters. Here, we have a union as a client of Diane and Maia’s new firm … but one that turns out to be less than keen on rocking the corporate boat.

The boat-rocking concerns the interrogation of retail workers on trumped-up theft charges, using a method taught to middle-managers and based on cod-psychological methods of facial muscle analysis. Despite Maia’s healthy scepticism about the legitimacy of such techniques, she can’t help but try them out on her own mother. No reference is made to the fact that Bernadette Peters has had so much plastic surgery that her face barely moves at all.

There’s nothing like a potential class action to get everyone motivated, and Marissa spies an opportunity to make herself useful and worm her way into a job as Diane’s assistant – much to the disgust of Diane’s new colleague, whose facial expressions require no detailed analysis since she is able to communicate such nuanced sentiments as “you hired a plucky white woman over multiple better-qualified black ones? OK THEN” with a scowl.

I wrongly thought Maia’s girlfriend had chucked her in the last episode, but no, she’s still here, reclining post-coitally with her bra on like all women do in real life. I’m glad The New Alicia still has someone she can trust (hopefully!) and that she did well in her first day in court. Her appointment as second chair might have been a stunt, but she and Lucca didn’t let that hold her back.

My only concern about Maia is that she might be a bit too likeable, emotional and human. Hopefully a few more courtroom battles will make her into the “fighter” Adrian is trying to mould.