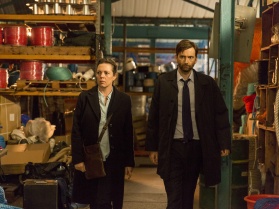 Has Olivia Colman had botox, or is Miller just fixing everyone with angrier stares this series? To be fair she has a lot to be miffed about, from the junior copper who seems intent on victim-blaming, to uncooperative witnesses, to her even less cooperative boss.

Hardy’s determined to get victim Trish in for her formal interview as soon as possible, so leans on Miller to lean on Beth Latimer to encourage her down to the station. Beth admirably refuses to be swayed from her duty to Trish, and proves herself a pretty decent rape crisis worker … but then goes and spoils it all by openly phoning her police chums and allowing them to gatecrash the sensitively handled rendez-vous. Oh well.

Meanwhile, the evil media overlords who own the Broadchurch Echo want to remove its entire editorial team – Maggie – out of Broadchurch and put kittens on the front page instead of, say, rape investigations. It’s just as well Maggie has the royalties from that non-consensual misery memoir to keep her warm at night.

There’s something pretty jarring about this series’ combination of daft, every-man’s-a-suspect policing scenes and moving, naturalistic moments involving Trish. The scene in which she tells her daughter what happened is particularly strong, but swiftly undermined by a montage of potential bogeymen reading news about the crime.

You get the feeling the programme makers are seeking praise for handling a “sensitive subject” in an accurate and even-handed way … but making every man in the village cartoonishly dodgy surely risks making a complete mockery of the crime at its heart. Actress Julie Hesmondhalgh is doing a heroic job but she can’t overcome the cliched cheesiness of the shock-horror closing scene.

THE SUSPECTS SO FAR