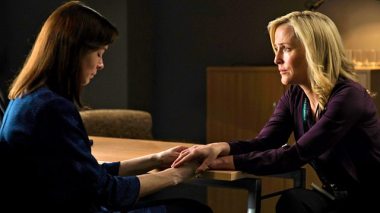 THE big news of tonight’s episode is that Jim’s become a feminist. Thanks goodness someone’s keeping Stella’s paternalistic tendencies in check. We wouldn’t want a criminal mastermind like Sally-Anne getting away with perverting the course of justice. It’s important to send a message to would-be wives of serial sex killers that stunts like miscarriages won’t get them anywhere.

If only someone had given the poor woman a hug last week, maybe she wouldn’t now be drugging her kids and apparently planning a drive into the sea. It’s a terrific performance by Bronagh Waugh, and a committed one given how gaunt she looks. Will Sally-Anne go through with the plan? Will Stella materialise on the beach and save the day (ie night)? Does anyone even remember the poor wee boy’s name?

It’s perhaps telling that many viewers seem to be running out of patience with The Fall now that the pace and indeed genre have changed and there are no graphic scenes of violence against women (although that nurse really does need to watch her back, and not let her obsession with near-death experience/massive crush on Spector cloud her judgement). But for me series three has already made up for the disappointment that was series two, even if the gender politics still feels a bit too sign-posted.

We’ve become used to seeing Stella in counselling mode, dealing with Rose and Tom in the hospital in whispered, reassuring tones, so it’s jarring to hear her question Rose in police mode. The line of questioning isn’t easy, but this conversation isn’t about putting her at ease, it’s about Stella continuing her previous work of building up a profile of Spector – a piece of work that’s ongoing given last week’s discovery suggesting he might be responsible for many more murders.

Finally Spector’s in handcuffs! And surrounded by a guards as he makes his way to another part of the hospital to appear in court via video link. I think we’re all just going to have to make room for creative license on this front. There’s still a lot of dubiety about his memory loss, but it would surely take a very clever and super-organised person to figure our whether their pretendy-forgetty alter ego was supposed to know about websites, TV shows, sporting events and all the rest. But if his crimes pre-date the start of his missing years, does it matter?

Meanwhile, the still-besotted Katie is no doubt tweeting #PrayForSpector from her phone while on the run after last week’s lemon-in-the-eye mini-drama. I’m so glad her role has been reduced this series, though we can certainly expect to see more of her once the court case gets properly under way.