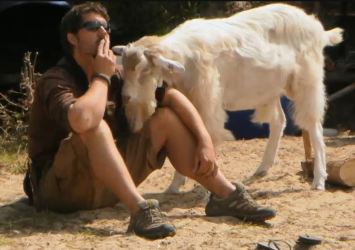 “Caroline has made a water bottle cover out of the dead foetus.”

Poor Jenna. She came to Eden to escape reminders of her own mortality, only to be confronted with macabre Etsy projects and served a drowned ewe for her dinner.

Spring is in the air, and gamekeeper-slash-IT consultant Glenn is turning over a new leaf. He was a key player in last week’s starve-the-women conspiracy but now he’s decided the ladyfolk aren’t all bad. Specifically, one particular woman who knows how to handle a sheep. I was a bit sceptical about Caroline’s shepherding credentials after episode one, but she proves herself here.

Isn’t a massage tent actually quite a useful addition to the camp given how hard all these whiny men-children claim to be working?

Meanwhile, his pal Tom is still belly-aching about Tara’s massage tent. This poses a difficult dilemma for the viewer: who do we dislike more? Tara is clearly workshy, rude and annoying, but I’m with the bespectacled oarsman: isn’t a massage tent actually quite a useful addition to the camp given how hard all these whiny men-children claim to be working? I was already learning towards Team Tara when she tackled that little sneak Rachel, who had forced the vote on whether the tent (and, surely, by extension Tara herself) should stay or go. “That’s your opinion, sweetie – you’re entitled to it” retorts Tara in the face of so much irrational opposition to her muscle-rubbing role.

Rachel then seems to delight in telling Glenn that Caroline isn’t attracted to him, after initiating a conversation that feels like it’s going to go in the opposition direction. I suppose this could be seen as saving him from an embarrassing knock-back, but what are they, fifteen? Rachel needs to chill out and have a massage. It’s hard not to see Glenn’s switch back to macho separatism as directly related to Caroline pairing up with Titch. Community, says Glenn, “is just putting rules on you. Carrying the weak.” Erk. Someone suggests launching Operation Cunt to bully the women out – which alarmingly suggests they believe they’ve been non-cuntish so far. The mind truly boggles. They later have a conversation about whether Operation Cunt might upset other campmates. Um, of course it will? That’s the point of it.

The plan works, ultimately, though Tara’s time was probably up anyway. “I love you guys,” she lies, moments after declaring everyone in the camp pussies, dicks and assholes. I can’t say I’m sad to see her go. There was plenty of evidence to suggest she lacks even basic social skills – although that isn’t to say her insights into the dynamics of the camp were entirely wide of the mark. There are definitely some confident women in there – Jenna, Katie and Caroline, for three – who are unafraid to speak out against the most dickish behaviour. The bespectacled oarsman seems capable of standing up to King Dick Tom, and reformed stop-thrower Anton continues to shine as chief diplomat.

Incidentally, I had suspected Jack the ex-Army sociopath was one of those not-really-Scottish Scottish people, and my suspicion is supported by the absence of any attempt to address the haggis. Also: I can’t be the only one who’s amazed the gang manages to pull off such a well-costumed eighties parties given their limited resources. It’s hard to imagine Katie’s thought process when packing: “A couple of king-size Mars bars, or a can of blue hairspray? Which will prove the more essential item in Eden?”

Series two looks amazing. I find it impossible to predict what will happen next, but am particularly intrigued by the “blackout” and camera-covering. Where will this leave the embedded crew members – will they join the rebellion?