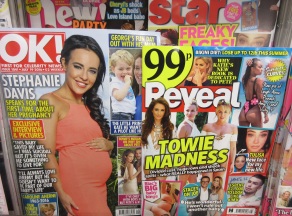 IT’S been a great week for the celebrity gossip mill – or a terrible one, depending on your perspective. Finally, after a decade of being hounded, harassed, judged and pitied, “poor Jen” has spoken out.

For those who have been living in a blissful bubble since around 2005, I’m referring to the Holywood actress Jennifer Aniston, who has found herself in the crosshairs of increasingly intrusive paparazzi not because she is a particularly remarkable famous person, but because she’s unwittingly found herself starring in a fan-fiction drama about her own life.

Unwittingly is the key word here. Aniston is no Taylor Swift, stage-managing smooching sessions with a new beau that she knows will be published the world over. She’s no Kim Kardashian, carefully commodifying her personal life one Instagram selfie at a time. Aniston doesn’t even have a Twitter account, yet she’s one of the most talked-about celebrities in the world.

Her tipping point finally came when she was photographed in a bikini with a very slightly rounded stomach, and the Daily Mail’s gynaecologist in residence declared her pregnant. She broke cover not simply to bemoan the invasion of her privacy and downright rudeness of such speculation, but to sharply challenge the narrative these photographs are designed to support: a narrative that suggests a heterosexual woman cannot be content without a man and a baby.

Some claim Aniston is trying to have it both ways

Some claim Aniston is trying to have it both ways: enjoying the money and privileges that go with being famous while moaning about the attention that comes with fame. But the scrutiny to which she is subjected is quite clearly out of all proportion – yes, she gives interviews about her film roles and makes glamorous red-carpet appearances, but these are contractual requirements and industry conventions, not exercises in vanity and egomania. Unlike modern-day “stars” who tip off photographers and sell their own stories, she has never consented to making her private life public.

Of course, the snappers wouldn’t make money if there was no public interest in looking at pictures of famous people and gossiping about their lives – a pass-time that’s widely regarded as corrosive to society and unhealthy to the individuals who indulge in it. But when, unlike Aniston, the subject has made clear they want to be talked about, is this really such a social evil? Or could it even be viewed as a positive development?

Evolutionary psychology has plenty to say about the importance of gossip to human animals. The British anthropologist Robin Dunbar has gone so far as to state that without it, human society as we know it would not exist. He argues that the word’s pejorative connotations are unjustified, citing observational studies that consistently find “social topics” account for more than half of all conversation time and that only a small fraction of this is concerned with policing so-called “free riders” – those who reap the benefits of being part of a social group while violating its norms.

These daysma, ny people are more preoccupied by the love lives of the rich and famous than those of their neighbours

In the recent past, people gossiped about those who lived in the same vicinity, keeping an eye on newspaper announcements of births, deaths and marriages and an ear to the ground for rumblings of affairs, separations and divorces. These days, however, many are more preoccupied by the love lives of the rich and famous than those of their neighbours – who, let’s face it, probably can’t compete with the likes of Kim Kardashian when it comes to norm violations.

This doesn’t mean we live in a utopia of local tolerance. Close-knit communities will always gossip about new arrivals, and judge those who don’t conform. But things are moving in the right direction. Not so long ago, Big Brother was condemned in certain quarters as a “freak show” for including housemates who were gay, transgender, disabled or even just a wee bit alternative. Like it or loathe it, the show’s positive impact in terms of fostering tolerance and inclusion should not be understated. Plus, of course, it provided a brand new stimulus for nationwide tittle-tattle. Might the migration of gossip beyond the village boundaries ultimately mean less scrutiny of the everyday folk who would rather their private business wasn’t the talk of the steamie?

Many scoff that it’s ridiculous for ordinary plebs to feel connected or invested in famous people’s lives. Their assumption is that money, fame and power insulate such men and women from life’s slings and arrows, but they miss the point: at the end of the day we’re all just human beings. When you cut celebrities, they bleed.

Unless, that is, they are simply trolling us half of the time, manipulating the media or conspiring with it to deliver a real-time soap opera for consumption by fans and foes alike. Many have queried whether “Hiddleswift” – the very public union of Taylor Swift and rising British actor Tom Hiddleston – is really what is seems. But if their shenanigans boost his profile and, more importantly, give people something juicy to gossip about, does it really matter?

A version of this article first appeared in the Sunday Herald.