I wasn’t sure what to expect from Shami Chakrabarti when she delivered this year’s Adler Lecture on human rights. I had seen the former Liberty director on TV a few times, usually in settings where she was required to fight her corner in the face of “human rights gone mad”-style diatribes from her opponents.

In this far more civilised context, she delivered a brilliant, thoughtful, funny lecture that seamlessly wove together tributes to numerous other women who have troubled the establishment by standing up for themselves and others. Edinburgh University’s Global Justice Academy filmed it, so you’ll have a chance to watch it online soon.

The lecture’s title was a nod to the time The Sun branded Chakrabarti “the most dangerous woman in Britain”, a title she proudly held for many years before the Daily Mail bestowed it on our very own Nicola Sturgeon. This tabloid nonsense inspired Edinburgh University’s Institute for Advanced Studies in the Humanities to launch the Dangerous Women Project, which hosts daily posts from “poets, playwrights and other creative writers, academics, journalists, commentators, artists, performers and opinion-formers.” 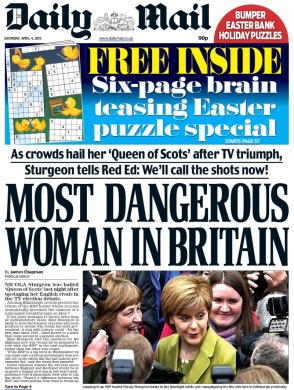 But back to Thursday night. Chakrabarti declared gender injustice the greatest human rights injustice facing the world, comparing it to apartheid but highlighting its persistence across time and place. She conceded that women are indeed dangerous – to those who seek to retain unfettered power.

She spoke of the shift away from references to “refugees” to “asylum seekers” (and David Blunkett’s “bogus asylum seekers”) to “migrants”, and the corresponding decreasing levels of sympathy these terms attract, reserving particular criticism for David Cameron’s scornful attack on Jeremy Corbyn’s visit to Calais to meet a “bunch of migrants”.

She highlighted the fact that just a few years after the successful battle to scrap ID cards, the rise of digital technology is compromising personal privacy in ways that few would have predicted. And of course, we’re now paying phone companies for the privilege of giving so much of ourselves away. Privacy, she noted, was not the “soft” right many people make it out to be, as so many other freedoms depend on it. She cited the shameful state surveillance of Doreen Lawrence, another “dangerous woman” who refused to rest until her son’s racist killers were brought to justice.

Surprisingly, Chakrabarti had some words of praise for Home Secretary Theresa May, the woman who has recently led calls for the Human Rights Act to be scrapped. She explained how May fixed the UK’s Abu Qatada problem by negotiating with Jordan to bring an end to the use of evidence obtained under torture. Unfortunately, rather than taking credit for this win-win outcome, May bemoaned the length of time it had taken and called for the obstacles she had faced to be removed.

The evening’s Q&A session was of unusually high quality – perhaps because Chakrabarti pre-empted the usual weakness of such with her gently sly remark that “the best is a comment thinly disguised as a question, don’t you think?” Perhaps the most important question related to the need to convey to the public that human rights “aren’t just for terrorists”. The key to this, according to Chakrabarti, is telling stories that highlight the breadth of cases where human rights legislation comes into play. She spoke of the work of her Liberty colleague Emma Norton, who has helped secure a fresh inquest into the deaths of Deepcut barracks and regularly represents women who have been victims of sexual crimes.

So far, so positive. But then Chakrabarti mentioned Gary McKinnon, and my ears pricked up. Glasgow-born McKinnon avoided extradition to the US for hacking into US Army and NASA systems, after Theresa May accepted there was a high risk he would commit suicide. So yes, this is a positive story about human rights, but it’s by no means as straightforward as Chakrabarti’s version suggested. She referred to McKinnon’s Asperger’s syndrome, but not the fact that it was diagnosed only after the hacking. She reduced him to a “Rain Main” character and described him as a “vulnerable man” – language that does little to help public perceptions of people on the autistic spectrum as “other”, incapable and dependent (more on problematic descriptions of “vulnerable” disabled people here). Finally, she uncritically repeated McKinnon’s assertion that he hacked into the system because he was “looking for UFOs” – omitting any reference to his criticism of US foreign policy and threat to “continue to disrupt at the highest levels”.

So yes, there is a need for positive stories that let the public know “it could be any of us”. But being economical with the truth when it comes to cases like this one arguably doesn’t help the cause.

Spreading the daffodil love to the office 😀
In bloom!
Rainbow cake! 🌈 🍰
Fascinating exhibition about an eccentric lady who experienced bursts of "spending fever", bought loads of dresses and coats she never wore, and would surely have bankrupted her family had online shopping been available in the early 20th century.
One of my new year's resolutions was to buy more flowers - this may be the best £6 I've ever spent!