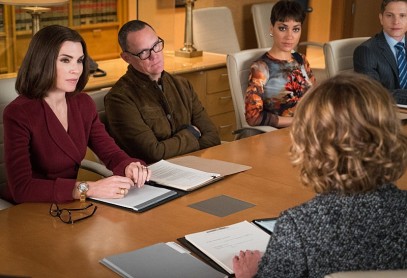 Finally an exasperated judge says what we’ve all thought many times during twisty-turny cases in The Good Wife where the prosecution changes approach after a whole round of fruitless evidence: “Why did we go through this exercise?!”

Why indeed. Though it was worth it to have the super-nippy Andrea Stevens back, this time trying to skewer Matthew Lillard’s puppy-like singer-songwriter (remember Tricky Trick? Thicky Thick? Whatever it was called).

Meanwhile, there’s more of the usual musical chairs as Eli finally gets shot of Ruth (and out of his cupboard), and the influential feminists poached by Grace start sneaking back to Lockhart, Agos and Lee (I hope this doesn’t impact on her finder’s fees). The main source of their displeasure with Florrick/Quinn is Alicia’s ratty neighbour, who’s sick of playing secretary to the law firm upstairs.

Oh no – outrage! Grace is fired, despite putting in one of her best turns yet as Florrick family representative at the residents’ association (veering brilliantly from contract law smackdown towards Harper Valley PTA). I reluctantly concede this was the right move, as the spin-off series might not happen if Grace flunks her exams. I hope she negotiates a good exit package though.

Does Eli really wish he’d been nicer to Ruth? I’m really not sure I buy his Vanessa Williams-inspired wholesale personality transplant

Marissa has the ultimate response to her dad’s brush-off attempts: “You got mom pregnant, so we’re doing this now”

While I continue to enjoy Lucca’s barfly badass approach, making her a heartbreaker all feels a bit to Kalinda 2.0

Spreading the daffodil love to the office 😀
In bloom!
Rainbow cake! 🌈 🍰
Fascinating exhibition about an eccentric lady who experienced bursts of "spending fever", bought loads of dresses and coats she never wore, and would surely have bankrupted her family had online shopping been available in the early 20th century.
One of my new year's resolutions was to buy more flowers - this may be the best £6 I've ever spent!