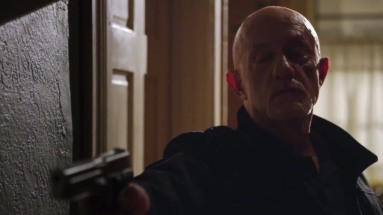 Oh no they didn’t. It’s one thing for Tuco’s associates to sneak into Mike’s house and threaten him, but it’s quite another for them to make gun-fingers at his beloved Kaylee.

We always knew Tuco would be out of prison before long, but it was painful to see Mike’s $50k master plan fall apart before his face had even had time to heal. I wasn’t entirely sure how he managed to secure the cash despite his hopeless negotiating position, but it was no surprise when he offered Nacho a no-quibble refund.

Perhaps next time he’ll have fewer qualms about putting a bullet in a gangster from a safe distance.

Meanwhile, Jimmy was back at the nail salon after suffering insomnia at his swanky apartment. Had he been sacked by Davis and Main? No such luck, it turned out. Instead he was still under the helicopter-like surveillance of Erin the Associate, so when Kim called to report a scam in progress he naturally couldn’t resist.

I was glad to see Kim and Jimmy back together, enjoying the aphrodisiac powers of bullshitting their way to a fat cheque. Jimmy even managed to improvise a compatible cup holder for his company car, but there’s no such quick-fix for a relationship that was doomed from the start. Will Kim ever tell him about her encounter with Chuck?

Is it just me, or does Kaylee seem older in Better Call Saul than she was in Breaking Bad? How far apart are these two timelines?